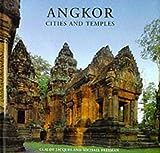 This pictorial record celebrates the cities and temples of Angkor in Southeast Asia. Ever since explorer and naturalist Henri Mouhot rediscovered the centre of Khmer civilization in Cambodia over a hundred years ago, the buildings, which date from the 9th to the 13th century, have become a source of great interest. Each of the significant monuments is illustrated, including the Angkor Wat itself, and the overgrown 13th-century temples of Ta Prohm and Preah Kahn. The Banteay Srei with its intricate carvings in pink sandstone is also included and illustrated in detail. Photographs by Michael Freeman are presented alongside text discussing Khmer society, kingship, religion and culture by Claude Jacques. Appendices include a discussion of iconography and different styles, a list of Khmer kings and a glossary of terms.